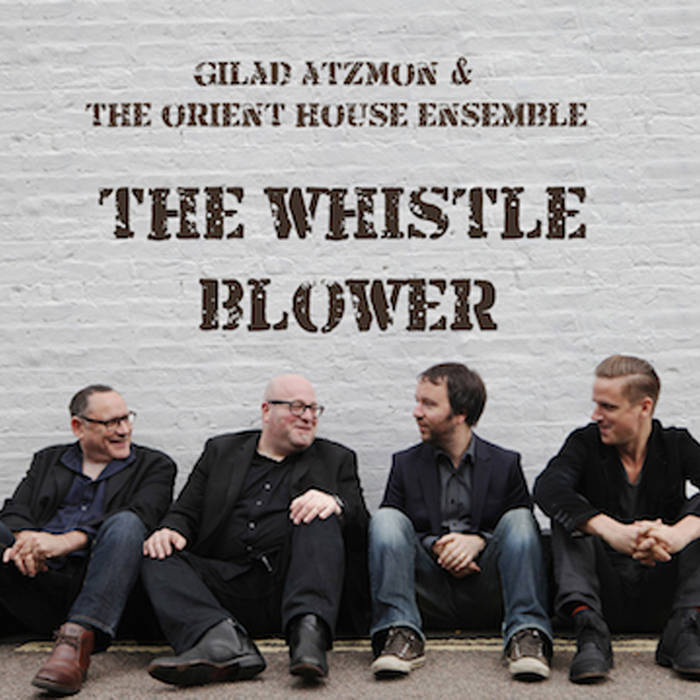 Carsten Pieper Gilad Atzmon is a masterful musician (mainly woodwinds) and so is the OHE! In my ears, Let Us Pray is pure Coltrane, Love Supreme-era.

The net is full of heated debates about Gilad Atzmon but I find it very hard to believe, that the man creating such sheer beauty (as for example in "Forever") should be a bad guy... Favorite track: Let Us Pray.

The Orient House Ensemble are celebrating their 15th year by launching The Whistle Blower, their 8th album to date. Saxophonist Gilad Atzmon is a giant of jazz—an imposing physical presence, a huge personality, technically masterful and emotionally committed to every note. On The Whistle Blower, the Orient House Ensemble's eighth album since it formed in 2000, he's joined by long-term Ensemble members Frank Harrison on piano and Yaron Stavi on bass along with new recruit drummer Chris Higginbottom. The band is as strong as ever, the album a worthy addition to its discography. Atzmon is an in-demand session player—he's on Pink Floyd's The Endless River (Columbia, 2014)—a producer and a long-term member of the much-loved Blockheads. However, it's the Orient House Ensemble that best represents his personal take on music, a quartet that's recorded some strikingly exciting original work as well as a loving tribute to Atzmon's early inspiration, Charlie Parker, (In Loving Memory Of America, Enja, 2009). In his poetic self-portrait on The Whistle Blower's sleeve Atzmon describes the compositions as "about love, nostalgia, devotion and simplicity" and himself as "a reactionary existentialist," "the enemy of progress" and "the Imam of retro." Crucially, he also states "I am happy." The album title is a self-deprecating reference to Atzmon's instruments of choice as well as to his political activism. The Whistle Blower is the first release on Atzmon's own Fanfare Jazz label. Atzmon wrote all of the tunes, mixing the sounds of his early years in the middle east with rock grooves and bebop flourishes. His playing focuses on the alto and soprano saxophones, but his accordion playing is also worthy of note, adding a jauntier and more upbeat feel to his often plaintive reeds. "Gaza Mon Amour" is a fiery opener—fast, danceable, energetic and positive. The following half-dozen tunes have a gentler, mellower, vibe. "Forever" is a beautiful ballad, Atzmon's romantic side emanating clearly from his soprano sax. "The Romantic Church" is another slow tune, Atzmon's alto and Harrison's piano are cool, Harrison's keyboards add a string section feel and the result is a sophisticated success. The 11-minute "Let Us Pray" takes inspiration from John Coltrane's spiritual jazz: it's an ambitious tune with some fine extended solos, though its impact would be heightened by reducing its length. The Gallic-flavored "The Song" puts the accordion center-stage and features the album's most graceful melody, while the dynamic "To Be Free" slowly builds and releases tension through soprano sax and piano solos. The Ensemble return to the romantic ballad with "For Moana"—Atzmon's paean to Italian adult-movie actress and politician Moana Pozzi, his "vintage romantic heroine." "The Whistle Blower" is a cheesy, tongue-in-cheek, tune full of wolf whistles, clichéd rhythms, Tali Atzmon's wordless lounge-jazz singing and a rather jolly vocal chorus from the gentlemen of the Ensemble. It's all rather delightful, a reminder that Atzmon the activist and musician is also a joker—and he's happy. – BRUCE LINDSEY, ALL ABOUT JAZZ

Gilad Atzmon was born in Israel in 1963 and had his musical training at the Rubin Academy of Music, Jerusalem (Composition and Jazz). As a multi-instrumentalist he plays Soprano, Alto, Tenor and Baritone Saxes, Clarinet and Flutes. His album Exile was the BBC jazz album of the year in 2003. He has been described by John Lewis on the Guardian as the “hardest-gigging man in British jazz”. His albums, of which he has recorded 14 to date, often explore political themes and the music of the Middle East. Until 1994 he was a producer-arranger for various Israeli dance & rock projects, performing in Europe and the USA playing ethnic music as well as Rock ‘n’ Roll and Jazz. Coming to the UK in 1994, Atzmon revived an interest in playing the music of the Middle East, North Africa and Eastern Europe that had been in the back of his mind for years. In 2000 he founded the Orient House Ensemble in London and started re-defining his own roots in the light of his emerging political awareness. Since then the Orient House Ensemble has toured all over the world. Gilad is the current member of the Blockheads, and has also recorded and performed with Ian Dury, Robbie Williams, Robert Wyatt, Sinead O'Connor, Paul McCartney, Nicolas Meier, Dwiki Dharmawan, Koby Israelite, Asaf Sirkis, Saul Rubin, The Water Boys. In 2014 he recorded with Pink Floyd and is featured on their last album The Endless River (on the tune Anisina). Also, being a prolific writer, Atzmon’s essays are widely published. His novels ‘Guide to the Perplexed’ and ‘My One And Only Love’ have been translated into 24 languages. Gilad’s latest book, The Wandering Who? is a study of Jewish Identity political identity. The film ‘Gilad And All That Jazz’: a documentary about Gilad’s life and music by film maker Golriz Kolahi was released in 2012 and voted Winner of the Best Feature Documentary, Logan Film Festival.Over the years Gilad Atzmon’s music has moved more and more towards a cultural hybrid. As a bandleader and reed player he has been amazing his listeners with a powerful personal style that combines great bebop artistry and Middle-Eastern roots in a sophisticated, sometimes ironical manner. Influenced by Coltrane’s powerful approach on the sax, Gilad’s live performances are simply breathtaking and overwhelming.

Yaron Stavi was born in Israel in 1975, where he studied classical music, and in 1996 he moved to London then in 1999 to Berlin and has established himself in London since 2002, and is considered one of the most emerging upright bass players in today's jazz, and he is versatile also with electric bass guitar. His resume includes some of the most important rock, pop, jazz and fusion artists today, such as David Gilmour (of Pink Floyd, featured on DG’s brand new album ‘Rattle That Lock’), Phil Manzanera (of Roxy Music), Robert Wyatt, Richard Galliano, Nigel Kennedy, Shane MacGowan (of The Pogues), Gilad Atzmon, John Etheridge, Asaf Sirkis, Mark Wingfield, Jarek Smietana, Gary Husband, Gene Calderazzo, Dwiki Dharmawan, and classical artists Pierre Boulez, Seijo Ozawa and many others.

Gilad Atzmon and Yaron Stavi will be featured on the upcoming MoonJune Records release of the Indonesian pianist and composer Dwiki Dharmawan “Pasar Klewer”, to be released in March 2016.

Bandcamp Daily  your guide to the world of Bandcamp

Featuring Oakland sounds from the Smart Bomb collective and Samplelov.